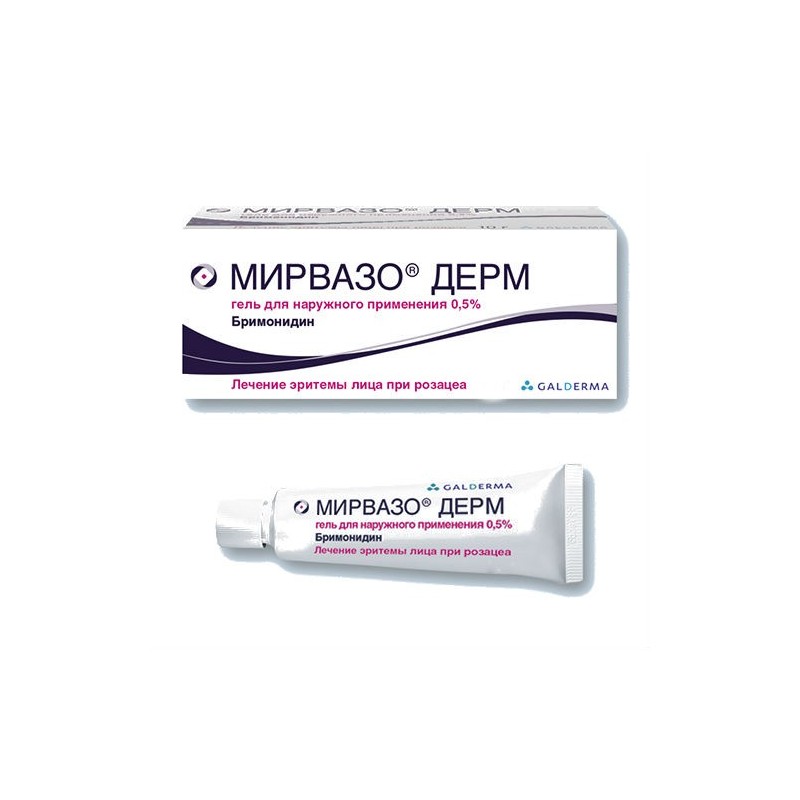 For external use only. A small amount of the gel is applied in a thin layer on the skin of each of the 5 face zones (forehead, chin, nose, cheeks) 1 time per day in the presence of erythema. The maximum recommended daily dose of the drug, divided into 5 parts in accordance with the areas of application, is 1 g. When applied to the skin, Mirvazo® Derm Gel should be spread evenly in a thin layer over the face, avoiding contact with the eyes, eyelids, lips, mouth and nasal mucosa. The gel should be applied only to the face.

Treatment of face erythema with rosacea.

Brimonidine is marketed under different brands and generic names, and comes in different dosage forms:

In clinical trials, the most frequent (1.2–3.3%) adverse reactions were observed, including redness, itching, hot flushes and a burning sensation of the skin. As a rule, these were mild or moderate reactions that did not lead to cessation of treatment. Cases of exacerbation of rosacea symptoms in patients treated with Mirvazo® Derm have been reported. Considering the data of all the clinical trials conducted, cases of exacerbation of symptoms were noted in 16% of patients. There was no significant difference in the safety profile of elderly patients and patients aged 18 to 65 years. In the post-registration period, frequent cases of increased redness, hot flashes, skin burning sensations and blanching of the skin at the site of application were noted. The undesirable reactions obtained during clinical trials (see Table 1) are classified according to organ systems and the frequency of development. Categorization of the frequency of adverse reactions: very often (> 1/10), often (> 1/100 to <1/10), infrequently (> 1/1000 to <1/100), rarely (> 1/10 000 to < 1/1000), very rarely (<1/10 000), frequency unknown (impossible to estimate, based on available data).

- Hypersensitivity to brimonidine or to any of the excipients; - children's age up to 18 years (safety and efficacy of the drug for this age category has not been established); - simultaneous use with monoamine oxidase (MAO) inhibitors (for example, selegiline or moclobemide), and tricyclic (imipramine) and tetracyclic (maprotiline, mianserin and mirtazapine) antidepressants that affect noradrenergic transmission. Carefully: - Pregnancy; - impaired liver and kidney function.

Research on the interaction of the drug with other drugs was not conducted. Brimonidine is contraindicated in patients taking monoamine oxidase inhibitors (MAO), and patients taking tricyclic and tetracyclic antidepressants that affect noradrenergic transmission. Consider the possibility of an additional or potentiating action when brymonidine is used jointly with substances depressing the central nervous system (alcohol, a white wer, too, or a whiteman, a white wer, too, could be an adjunct. sedatives or anesthetics). Data on the effect of brimonidine on the level of circulating catecholamines are not available. Nevertheless, caution is recommended in patients receiving drugs that can affect the metabolism of amines and increase their concentration in the blood, such as chlorpromazine, methylphenidate, reserpine. It is recommended to be careful when using brimonidine at the same time or changing its dose in the treatment of ophthalmic diseases. It is recommended to be careful at the beginning of treatment or changing the dose of jointly prescribed systemic drugs (regardless of their dosage form), which can interact with alpha adrenergic receptor agonists or affect their activity, ie, they are agonists or antagonists of adrenergic receptors (for example, isoprenaline, prazosin). In some patients, brimonidine can cause a clinically insignificant decrease in blood pressure, so care should be taken when using drugs such as antihypertensive drugs and / or cardiac glycosides, along with brimonidine.

Do not apply Mirvazo® Derm on irritated skin or open wounds, on the area around the eyes. In case of severe irritation or allergy, it is necessary to interrupt the treatment with the drug. After using the drug, be sure to wash your hands. The drug Mirvazo® Derm can be used in conjunction with other drugs used to treat the inflammatory elements of rosacea.They can be applied to the skin only after the Mirvazo® Derm has dried, and not at the same time as it. After application and drying of Mirvazo® Derm it is possible to use cosmetics. Erythema and hyperemia The effect of Mirvazo® Derm begins to wane after a few hours after application. In some patients, the resumption of erythema and transient hyperemia in a more severe form than that observed before treatment has been described. Most cases of erythema were observed during the first 2 weeks after the start of treatment. In some patients, transient hyperemia was observed. The time of onset of redness after applying the gel ranged from 30 minutes to several hours. In most cases, erythema and hyperemia passed after discontinuation of the drug. In case of aggravation of erythema, use of the drug should be discontinued. Symptomatic measures, such as cooling, taking nonsteroidal anti-inflammatory drugs and antihistamines, can alleviate the symptoms. After the resumption of the use of Mirvazo® Derm, relapses of exacerbations of erythema and hyperemia were noted. However, if necessary, treatment can be resumed after restoration of the skin barrier function, starting with a trial application of the drug on a small area of ​​the face no less than 1 day before the full resumption of treatment of the entire skin of the face. It is necessary to strictly observe the recommended dose and frequency of application: once a day, in a very thin layer. It is necessary to avoid increasing the maximum daily dose and / or frequency of use, as the safety of increased daily doses or repeated daily use has not been established. Simultaneous use of alpha adrenergic receptors with systemic agonists may enhance the side effects of this class of drugs in patients with: - severe or uncontrolled, or unstable cardiovascular diseases; - depression, cerebral or coronary blood circulation insufficiency, Raynaud's disease, orthostatic hypotension, thromboangiitis obliterans, scleroderma, or Sjogren's syndrome. Mirvazo® Derm contains methyl parahydroxybenzoate, which can cause allergic reactions (possibly of a delayed type), as well as propylene glycol, which can cause skin irritation. Impact on the ability to drive trans. Wed and fur .: The drug does not affect or only slightly affects the ability to drive vehicles or engage in other potentially dangerous activities that require increased concentration and psychomotor speed.

Information about overdose brimonidine when applied externally in adult patients is missing. In case of accidental use of the drug inside, such phenomena of overdose with alpha2 receptor agonists as hypotension, weakness, vomiting, drowsiness, lethargy, bradycardia, arrhythmia, miosis, apnea, hypotension, hypothermia, respiratory depression and seizures are possible. In the course of a clinical study, 2 cases of serious adverse events were observed caused by the accidental ingestion of Mirvazo Derm by young children. The symptoms observed in children corresponded to the well-known symptoms of alpha-2 receptor agonist overdose in young children and completely disappeared within 24 hours. Treatment of overdose while taking the drug inside includes supportive and symptomatic therapy, it is necessary to maintain airway patency.

Studies and clinical trials of Brimonidine (Click to expand) 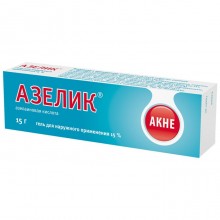 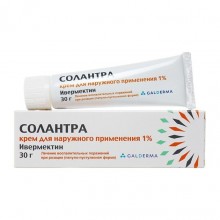 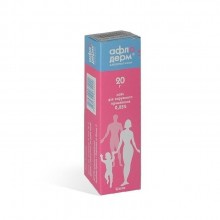 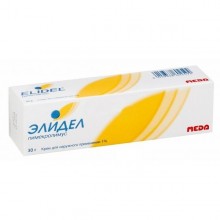 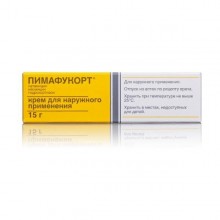 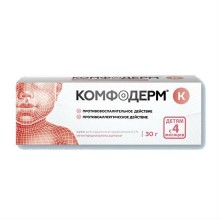 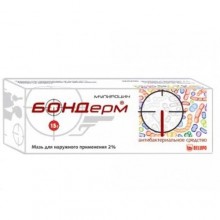