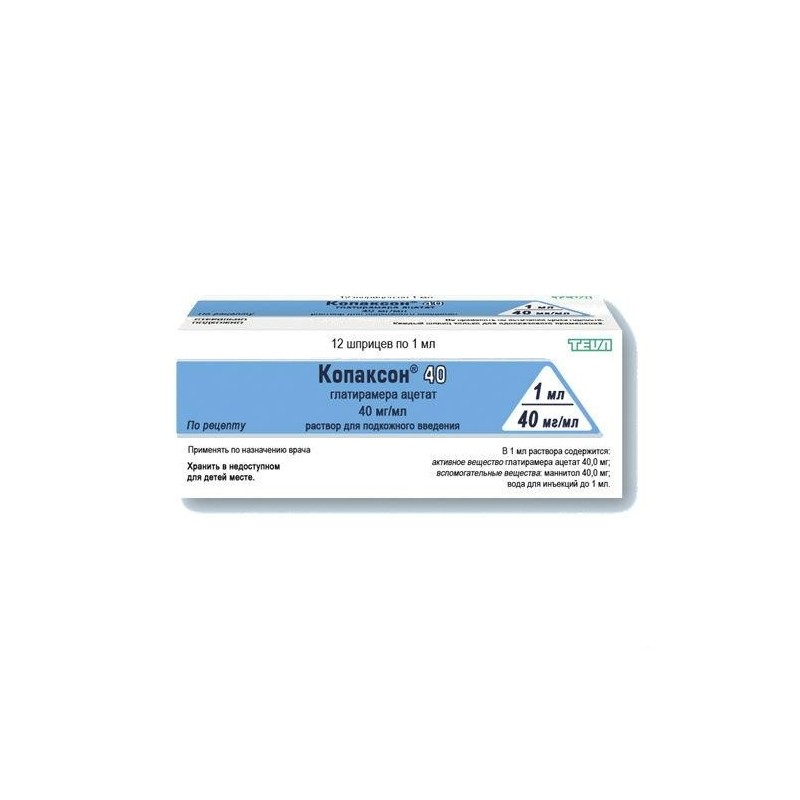 Copaxone-Teva (glatiramer acetate) is an acetic acid salt of a mixture of synthetic polypeptides formed by 4 natural amino acids: L-glutamic acid, L-alanine, L-tyrosine and L-lysine, and has elements of similarity to the basic protein of myelin in chemical structure. Glatiramer acetate changes the course of the pathological process in demyelinating disease of the central nervous system - multiple sclerosis, which refers to autoimmune diseases that change the ratio of T-suppressors in the body. Glatiramer acetate has an immunomodulatory effect at the injection site. Its therapeutic effect is mediated through the systemic spread of activated T-suppressors. Glatiramer acetate has a specific mechanism of action, which is based on the ability to competitively replace myelin antigens - myelin basic protein, myelin oligodendrocyte glycoprotein and proteolipid protein at the sites of binding to the molecules of the main histocompatibility complex class 2 located on antigen-presenting cells. Competitive displacement results in two responses: stimulation of antigen-specific suppressor T-lymphocytes (Th2-type) and inhibition of antigen-specific effector T-lymphocytes (Th1-type). Activated T-suppressor lymphocytes enter the systemic circulation and enter the central nervous system. Once in the area of ​​inflammation in the central nervous system, these T-lymphocytes are reactivated by myelin antigens, which leads to their production of anti-inflammatory cytokines (including IL-4, IL-6, IL-10). These cytokines reduce local inflammation by suppressing the local inflammatory T-cell response, which leads to the accumulation of specific anti-inflammatory Th2-type cells and inhibition of the pro-inflammatory Th1-cell system. In addition, glatiramer acetate stimulates the synthesis of neurotrophic factor by Th2 cells and protects brain structures from damage (neuroprotective effect). Glatiramer acetate does not have a generalized effect on the main links of the body's normal immune responses, which fundamentally distinguishes it from non-specific immunomodulators, including beta-interferon preparations. The resulting antibodies to glatiramer acetate with prolonged use do not have a neutralizing effect that reduces the clinical effect of the drug.

Administer subQ in the form of injections of 40 mg (1 filled with a solution of the drug syringe for injection) 3 times a week, the minimum interval between injections is 48 hours.
The drug is not intended for intravenous or intramuscular injection.
Currently, data on the duration of treatment is not available. The decision on the appointment of a long course of treatment should be made by the attending physician in each case.
Patients are recommended to undergo training on self-injection technology. The first injection (as well as 30 minutes after it) should be supervised by a qualified specialist. To reduce the risk of irritation or pain in the injection area, it is necessary to change the area for injection each time.
The drug is not recommended for use in children and adolescents under the age of 18 years, since clinical studies in patients of these age groups have not been conducted.
The efficacy and safety of the drug in elderly patients have not been studied.
The efficacy and safety of the drug in patients with renal insufficiency have not been studied.
Each syringe with the drug Copaxone® 40 is intended for single use only.

- hypersensitivity to Glatiramer acetate or mannitol;
- pregnancy;
- children's and teenage age till 18 years (efficiency and safety are not studied).
With care: predisposition to the development of allergic reactions, cardiovascular diseases, impaired renal function.

The interaction between the drug Copaxone® 40 and other drugs have not been separately evaluated. No data on the interaction with interferon beta.
An increase in cases of reactions at the injection site with simultaneous administration of the drug Copaxone® 40 with corticosteroids.
In an in vitro study, it was suggested that Glatiramer acetate has a high degree of binding to plasma proteins and is not displaced from its association with plasma protein alone, as well as phenytoin or carbamazepine.However, since the drug Copaxone® 40 has a potential effect on protein-binding substances, it is necessary to control its simultaneous use with other medications.

The drug Copaxone® 40 is contraindicated in pregnancy. During treatment, you must use reliable methods of contraception.
There is no data on the use of Copaxone® 40 during pregnancy, the possible risk of use during pregnancy has not been established.
Studies on animals are insufficient to establish the effect of the drug on pregnancy, embryo / fetus development, childbirth, and postnatal development.
It is not known whether Glatiramer acetate is excreted in breast milk, so if you need to use Copaxone® 40 during lactation, you should evaluate the expected benefit of therapy for the mother and the potential risk to the baby.

Initiation of treatment with Copaxone® 40 should be carried out under the supervision of a neurologist and a physician experienced in the treatment of multiple sclerosis. The drug is not indicated for the treatment of primary or secondary progressive multiple sclerosis.
Patients should be informed about the possibility of adverse reactions, including arising directly after an injection of the drug Kopakson® 40.
Most of these symptoms are short-lived, spontaneously resolved without consequences. With the development of serious adverse reactions should immediately discontinue therapy and contact your doctor or call an ambulance. The decision on the use of symptomatic therapy is taken by the doctor.
There is no evidence that certain groups of patients are more at risk of such reactions. However, patients with cardiovascular diseases should be supervised by a physician throughout the entire treatment period.
Several cases of seizures and / or anaphylactoid or allergic reactions have been identified. Severe hypersensitivity reactions (bronchospasm, anaphylactic reaction or urticaria) can also be rarely encountered. In case of severe reactions, it is necessary to prescribe the appropriate treatment and stop taking the drug.
Antibodies to Glatiramer acetate were detected in the serum of patients. After a course of treatment with an average duration of 3-4 months, their maximum concentration was recorded, which subsequently decreased and stabilized at a level just above the baseline.
There is no evidence that antibodies to Glatiramer acetate have a neutralizing effect or affect the clinical efficacy of the drug.
In patients with renal insufficiency, renal function should be monitored, although there is no convincing evidence that the deposition of immune complexes has an effect on glomerular filtration.
If the patient does not have the ability to store syringes with the drug Copaxone® 40 in the refrigerator, then storage is allowed at a temperature of 15-25 ° C, but not more than 1 month. If during the month syringes with the drug were not used, and the blister cell packaging was not opened, these syringes should be further stored in a refrigerator (from 2 ° to 8 ° C).
Influence on ability to drive motor transport and control mechanisms
Studies on the impact on the ability to drive vehicles and mechanisms was not conducted.

Symptoms: There have been several reports of overdose (up to 300 mg of Glatiramer acetate). No adverse reactions other than those listed above were observed.
Treatment: in case of overdose, careful observation, symptomatic and supportive therapy is indicated.

Studies and clinical trials of Glatiramer Acetate (Click to expand) 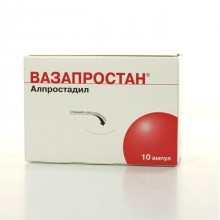