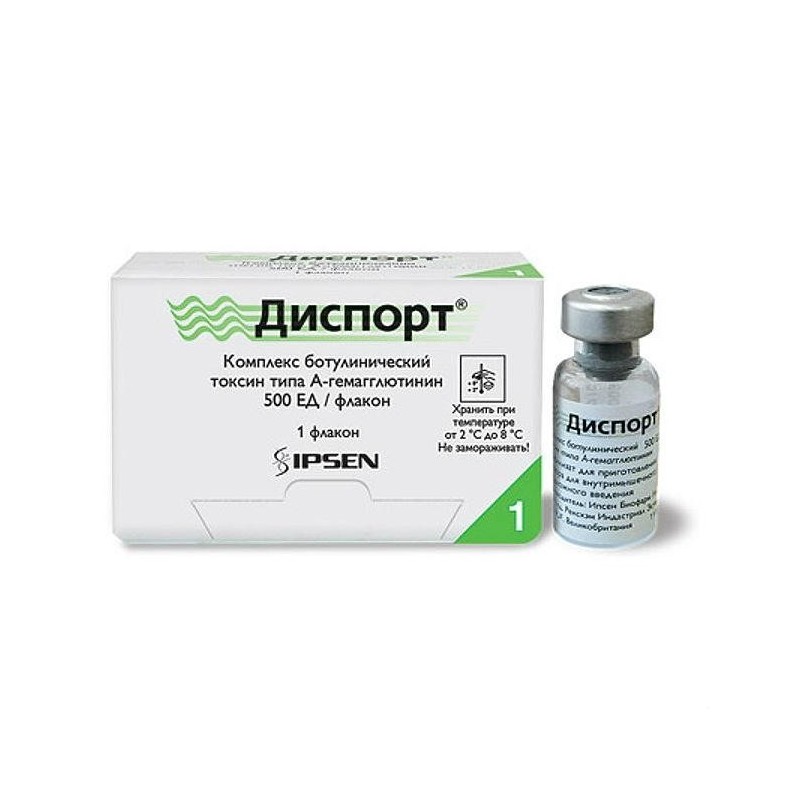 Dysport is a muscle relaxant. Clostridium botulinum type A toxin blocks the release of acetylcholine in the neuromuscular synapse, which leads to muscle relaxation in the area of ​​drug administration. Restoration of neuromuscular transmission occurs gradually, as new nerve endings are formed and contacts with the postsynaptic motor end plate are restored.
The effect of the drug lasts for 3-4 months.

For use in adults:
- blepharospasm;
- hemifacial spasm;
- spastic torticollis in adults;
- spasticity of the arm muscles after a stroke;
- hyperkinetic (facial) folds (wrinkles) of the face.
For use in children over 2 years old:
- dynamic deformity of the foot, caused by spasticity, with cerebral palsy.

For adults and elderly patients, the total initial dose fortreatment of bilateral blepharospasm makes 120 PIECES on each eye.
The drug is injected s / c in a volume of 0.1 ml (20 U) medially, in a volume of 0.2 ml (40 U) - laterally into the junction between the preseptal and orbital parts of both the lower and upper orbital muscles of each eye. For injections into the upper eyelid, the needle should be directed away from the center so as not to hurt the muscle lifting the upper eyelid.
The manifestation of the clinical effect can be expected within 2-4 days, the maximum therapeutic effect develops within 2 weeks.
Forrelapse prevention drug administration should be repeated every 8 weeks or depending on the clinical situation. With each subsequent administration, the dose should be reduced to 80 U per eye (for example, 0.1 ml (20 U) medially and 0.1 ml (20 U) laterally above and below the eye according to the method presented above). In the future, the dose of the drug can be reduced to 60 U per eye, due to the exclusion of medial injection into the lower eyelid. Subsequent doses are determined depending on the effect obtained.
Withunilateral blepharospasm treatment is limited to the area of ​​the affected eye. Similar treatment is carried out athemifacial spasm.
The doses recommended fortorticollis treatment, used in adults with normal body weight and satisfactory development of the neck muscles. Reducing the dose of the drug is possible with pronounced weight loss or in the elderly, with reduced body weight.
Initial single dose for treatmentspastic torticollis is 500 U, the drug is administered in parts of 2 or 3 of the most active muscles of the neck.
Withrotation crank 500 IU of the drug is administered as follows: 350 IU in the belt muscle of the head, ipsilateral to the direction of rotation of the head and 150 IU in the sternocleidomastoid muscle, contralaterally to the rotation.
Withlaterocollis (side crook, head tilted to shoulder) The drug at a dose of 350 IU is injected ipsilaterally into the belt muscle and at a dose of 150 IU, ipsilaterally into the sternocleidomastoid muscle. In cases involving a shoulder lift due to the trapezius muscle or the muscle that lifts the scapula, treatment may be required in accordance with the apparent hypertrophy of the muscles or according to electromyography.
With the introduction of the drug in 3 muscles, a dose of 500 IU is distributed as follows: 300 IU is introduced into the belt muscle, 100 IU into the sternocleidomastoid muscle, 100 IU into the third muscle.
Withanterocollis (front crooked, head tilted forward) enter 150 IU in both sternocleidomastoid muscles.
Withretrocollise (back crooked, tilted head back) 250 U are injected into each of the belt muscles of the head. Then, the drug can be injected bilaterially into the trapezius muscles (250 U per muscle). If necessary, if there is not enough effect, repeated injections are performed after 8 weeks.
It should be borne in mind that bilateral injections into the strap muscles may increase the risk of developing weakness in the neck muscles.
With the subsequent administration of the drug in accordance with the clinical effect and the observed side effects, it is possible to use optimal doses. Recommended dose - 250-1000 IU. With the use of the drug in a dose of more than 1000 IU increases the risk of side effects, especially dysphagia. Therefore, the use of the drug in a dose of more than 1000 IU is not recommended.
Clinical improvement in spastic crooked is observed within 1-2 weeks after injection. Repeated administration of the drug is recommended every 12-16 weeks or, if necessary, to prevent relapse.

Allergic reactions: skin rash.
Local reactions: burning sensation for 1-2 minutes
Other: flu-like syndrome.
When treating blepharospasm and hemifacial spasm: often - blepharoptosis.A few patients had diplopia or symptoms indicating the spread of paralytic effects on the medial muscles of the face (these phenomena disappear within 2-4 weeks after discontinuation of the drug). Perhaps the appearance of dry eyes and the development of keratitis due to a decrease in the frequency of blinking (in these cases, the use of artificial tears). Perhaps the appearance of hematoma and puffiness of the eyelids of short duration. It is also possible the occurrence of reversible external ophthalmoplegia when using the drug in high doses.
In the treatment of spastic torticollis: often - dysphagia. In a double-blind, placebo-controlled study of the drug, dysphagia was observed in 29% of patients who were prescribed Dysport at a dose of 500 U, and in 10% of patients who received placebo. Dysphagia is dose-dependent in nature and is noted most often when the drug is administered to the sternocleidomastoid muscle. With the development of dysphagia, it is necessary to refrain from eating coarse food until the symptoms disappear. In patients with severe dysphagia with laryngoscopy, accumulation of saliva was observed. Sometimes these patients may require aspiration of saliva, especially for violations of the airway.
Perhaps the development of weakness of the muscles of the neck, dry mouth, voice changes.
In rare cases, there was a general weakness, visual impairment (including diplopia and blurred vision), difficulty in breathing (when using the drug in high doses).
These side effects disappear within 2-4 weeks.
In the treatment of spasticity of the upper limbs in adults after a stroke: muscle weakness (6.7%), flu-like symptoms (5.6%), fatigue (3.3%), pain at the injection site (3.3%), general weakness (2.2%), drowsiness (1.1%). Most of these side effects disappear within 2 weeks.
In the treatment of spasticity in children with cerebral palsy: in a small number of patients (up to 2.1%) local weakness of skeletal muscles can be observed, which sometimes causes falls (up to 0.8%). Rarely - enuresis is possible (up to 1.3%); very rarely (from 0.7% to 0.9%) - drowsiness, fatigue, asthenia, pain at the injection site, flu-like symptoms, nausea. Most of these side effects disappear within 2 weeks.
When correcting mimic wrinkles: reversible ptosis of the upper eyelid (3%), numbness, soreness at the injection site, headache (1.3%), hematomas at the injection site (3-10%), omission or rise of the eyebrows (less than 1%). Diplopia is extremely rare. A probable cause of ptosis of the upper eyelid is the diffusion of the drug into the muscle, raising the upper eyelid when correcting the vertical folds above the bridge of the nose or horizontal wrinkles on the forehead. Ptosis is reversible and disappears by the end of 3-4 weeks after injection.

With simultaneous use with aminoglycosides and drugs that increase the intracellular concentration of calcium (aminopyridine, tetraethylammonium), it is possible to enhance the action of Dysport.

Dysport treatment should be carried out by a specialist with experience in the diagnosis and treatment of these diseases and trained in the method of administration of the drug Dysport.
It should be borne in mind that electromyography is used in all complicated forms of torticollis, with repeated administration of the drug or in cases of treatment failure. Electromyography is shown with the introduction of the drug in the deep muscles of patients with overweight, with poorly palpable muscles.
The main area of ​​Dysport application for cosmetic correction is the upper half of the face. The lower half of the face and neck are corrected by administering botulinum toxin much less frequently. In these areas it is preferable to use other methods.
With extreme caution should re-enter the drug in patients who have allergic reactions to the previous injection. The risk of an allergic reaction should be considered when assessing the potential benefits of treatment.
With caution and under strict medical supervision, the drug is prescribed to patients with subclinical or clinical manifestations of neuromuscular transmission lesions, since possible development of severe muscle weakness.
In the acute stages of comorbidities, administration of the drug is resumed after recovery.
Currently, there are no data on the appearance of immune reactions in the treatment of blepharospasm or hemifascial spasm. However, in some patients, antibotulinic antibodies were observed in the treatment of spastic torticollis. Clinically, this was manifested by a decrease in the therapeutic effect, which required a constant increase in doses of the drug.
It is possible to minimize the likelihood and severity of side effects by strictly adhering to the methods of administering Dysport and taking into account the anatomical and physiological features of each individual patient.
Not recommended simultaneous use of the drug Dysport with antibiotics, aminoglycosides, as well as with drugs that increase the intracellular concentration of calcium (aminopyridine, tetraethylammonium).
Influence on ability to drive motor transport and control mechanisms
The question of the possibility of practicing potentially hazardous activities that require increased attention and quickness of psychomotor reactions should be resolved only after evaluating the patient's individual response.

Symptoms: neuromuscular paralysis.
Treatment: there is no specific antidote. The administration of toxoid is ineffective. Showing supportive therapy, mechanical ventilation with paralysis of the respiratory muscles.

Studies and clinical trials of Dysport (Click to expand)