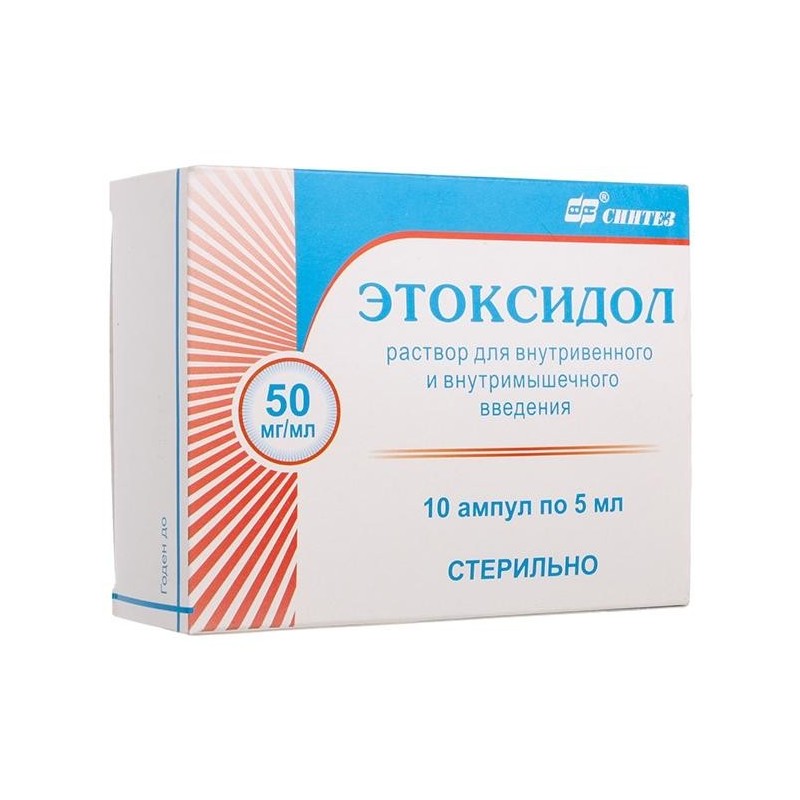 Pharmacodynamics
Etoksidol is an inhibitor of free radical processes, has a membrane-protective, antihypoxic, nootropic, anticonvulsant, anxiolytic effect, increases the body's resistance to stress. Etoxydol has anti-ischemic properties, improves blood flow in the ischemic zone, limits the zone of ischemic damage, detects a lipid-lowering effect, reduces the content of total cholesterol and low-density lipoproteins.
The drug increases the body's resistance to the effects of various damaging factors, to oxygen-dependent pathological conditions (shock, hypoxia, ischemia, cerebral circulation disorders, alcohol intoxication and antipsychotics (neuroleptics)). Etoxydol is able to modulate the functional-metabolic state of red blood cells, adjust the functional status of the liver and kidneys.
Restoring the activity of the synthesis of a macroergic metabolite of 2,3-diphosphoglycerate, the drug increases the dissociation of oxyhemoglobin and restores oxygen tension.
The effectiveness of this drug for encephalopathy is due to an increase in oxygen in arterial blood; penetration of Etoxydol through the blood-brain barrier.
The drug improves brain metabolism and blood supply to the brain, improves microcirculation and rheological properties of blood, reduces platelet aggregation. Stabilizes the membrane structure of blood cells (erythrocytes and platelets) during hemolysis.
The mechanism of action of the drug due to its antioxidant, antihypoxic and membrane-protective action. It inhibits lipid peroxidation, increases the activity of superoxide dismutase, reduces the content of total organic peroxides, helps accelerate the metabolism of aldosterone (by normalizing the activity of the CYP3A4 isoenzyme), increases the ratio of lipid proteins, reduces the viscosity of the membrane, increases its fluidity. By suppressing peroxides and oxidant activity, it blocks the oxidation of β-lipoproteins (low density lipoproteins), which are the main substrate for the formation of atherosclerotic plaques in blood vessels. Modulates the activity of membrane-bound enzymes (calcium-independent phosphodiesterase, adenylate cyclase, acetylcholinesterase), receptor complexes (benzodiazepine, GABA, acetylcholine), which enhances their ability to bind to ligands, helps to preserve the structural and functional organization of biomembrane, and the use of the use of in-route flow patterns.

Ethoxydol is marketed under different brands and generic names, and comes in different dosage forms:

How to start taking the drug Trikvilar®

When switching from other COCs, vaginal ring or contraceptive patch. It is preferable to start taking the drug Trikvilar® the next day after taking the last active tablet from the previous package, but in no case later than the next day after the usual 7-day break (for drugs containing 21 pills) or after taking the last inactive tablet (for drugs containing 28 pills. packaged). Trikvilar drug intake® should begin on the day the vaginal ring or patch is removed, but no later than the day when a new ring is to be inserted or a new patch is pasted.

When switching from contraceptive preparations containing only gestagens («mini drank», injectable forms, implant), or with a progestogen-releasing intrauterine contraceptive (Mirena®). A woman can switch from a “mini-drink” to Triquilar®on any day (without a break), from the implant or intrauterine contraceptive with the progestogen - on the day of its removal, from the injection form - from the day when the next injection should be made. In all cases, you must use an additional barrier method of contraception during the first 7 days of taking pills.

After abortion in the first trimester of pregnancy. A woman can start taking the drug immediately. Subject to this condition, the woman does not need additional contraceptive protection.

After childbirth or abortion in the II trimester of pregnancy. It is recommended to start taking the drug on the 21-28th day after birth, if the woman is not breastfeeding, or after an abortion in the second trimester of pregnancy. If the reception is started later, you must use an additional barrier method of contraception during the first 7 days of taking the pills. However, during sexual intercourse, before starting the drug, Triquilar® pregnancy should be excluded or it is necessary to wait for the first menstruation.

If the delay in taking the drug was less than 12 hours, contraceptive protection is not reduced. A woman should take a pill as soon as possible, the next one is taken at the usual time.

If the delay in taking the pills is more than 12 hours, contraceptive protection can be reduced. The more pills are missed, and the closer the pass to the 7-day break in taking pills, the greater the likelihood of pregnancy. In this case, you can follow the following two basic rules:

- the drug should never be interrupted for more than 7 days;

- 7 days of continuous pills are required to achieve adequate suppression of the hypothalamic-pituitary-ovarian regulation.

Accordingly, the following recommendations can be given:

The first week of taking the drug. A woman should take the last missed pill; as soon as possible, as soon as he remembers (even if it means taking two pills at the same time).The next pill is taken at the usual time. Additionally, a barrier method of contraception (for example, a condom) should be used within the next 7 days. If sexual intercourse took place during the week before the pill is missed, the likelihood of pregnancy must be considered.

The second week of taking the drug. A woman should take the last missed pill as soon as she remembers (even if it means taking two pills at the same time). The next pill is taken at the usual time. Provided that the woman took the pills correctly within 7 days preceding the first missed pill, there is no need to use additional contraceptive measures. Otherwise, as well as skipping two or more pills, you must additionally use barrier methods of contraception (for example, a condom) for 7 days.

The third week of taking the drug. The risk of reducing the reliability is inevitable due to the upcoming break in taking pills. A woman should strictly adhere to one of the following two options. At the same time, if in the 7 days preceding the first missed pill, all the pills were taken correctly, there is no need to use additional contraceptive methods:

If the woman had vomiting or diarrhea within 3-4 hours after taking the pills, the absorption may be incomplete and additional contraceptive measures should be taken. In these cases, you should focus on the recommendations when skipping pills.

Change the day of the onset of menstrual bleeding

In order to delay the onset of menstrual bleeding, a woman must continue taking the drug using the last 10 table. (numbered from 12 to 21) from another package of Triquilar®without interrupting reception. Thus, the cycle can be extended for up to 10 days until the end of the second package. While taking the drug from the second package, a woman may experience spotting or breakthrough uterine bleeding. Regular intake of the drug Triquilar® then resumes after the usual 7-day break in taking pills.

In order to postpone the day of the onset of menstrual bleeding to another day of the week, the woman should reduce the next break in the pill for the desired number of days. The shorter the interval, the higher the risk that she will not have withdrawal bleeding and there will be spotting or breakthrough bleeding while taking the pills from the second package (just as if she would like to delay the onset of menstrual bleeding).

Drug Triquilar® contraindicated in women with severe liver disease, as long as the indicators of liver function do not come back to normal.

Patients with disorders of the kidneys. Drug Triquilar® not specifically studied in patients with impaired renal disease. The available data do not imply correction of the dosage regimen in such patients.

Chloasma can sometimes develop, especially in women with a history of pregnant chloasma.

As with other combined oral contraceptives, in rare cases thrombosis and thromboembolism may occur.

Do not use Triquilar if you have any of the conditions or diseases listed below. If any of them are detected, tell your doctor.

If any of these conditions appear for the first time while receiving Triquilar, stop taking this drug right away and consult your doctor. In the meantime, use non-hormonal contraceptives.
Use with caution. If Triquilar is used in the presence of any of the conditions listed below, you may need careful observation - why, the doctor will explain. Before you start taking Triquilar, tell your doctor if you have any of the following conditions and diseases:

Chloasma (yellowish - brown foci of pigmentation on the skin, especially on the face) now or in the past. If they are, avoid prolonged exposure to the sun or ultraviolet radiation.

Some medicines can reduce the effectiveness of Triquilar. These include drugs used to treat epilepsy (for example, primidone, phenytoin, barbiturates, carbamazepine, oxcarbazepine, topiramate, felbamate), tuberculosis (for example, rifampicin, rifabutin) and HIV infection (ritonavir); antibiotics for the treatment of some other infectious diseases (for example, ampicillin, tetracyclines, griseofulvin), as well as hypericum medicines (used mainly in the treatment of depressive conditions). Sulfonamides, derivatives of pyrazolone are able to enhance the metabolism of the steroid hormones contained in the preparation.

Trikvilar can not be used during pregnancy and during lactation.

When skipping the drug Triquilar over 12 hours, you must take the next pill as quickly as possible and use additional methods of contraception until the end of the cycle. The effectiveness of the drug is reduced while taking drugs that activate the enzyme function of the liver, vomiting, diarrhea. Triquilar should be withdrawn during prolonged immobilization and 6 weeks before the planned surgical intervention.
It is not recommended to prescribe Triquilar to smokers over 35 years old. Women younger than 18 and older than 35-40 years are recommended three-phase low-dose drugs. For therapeutic and prophylactic purposes it is advisable to use monophasic drugs. The frequency and severity of side effects depends on the doses and ratios of the active substances that make up each preparation.

Symptoms that may occur during overdose: nausea, vomiting, bleeding from the genital tract.
In case of overdose, consult a doctor.