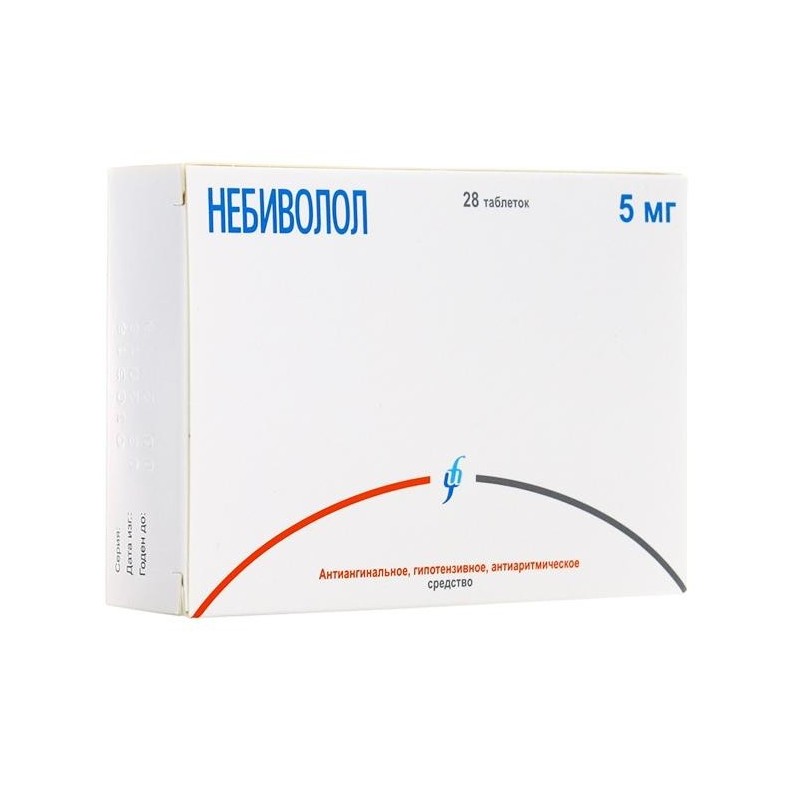 The antihypertensive effect is also due to a decrease in the activity of the renin-angiotensin-aldosterone system (RAAS) (it does not directly correlate with changes in plasma renin activity).

By reducing myocardial oxygen demand (decreasing heart rate (HR), reducing preload and afterload), nebivolol reduces the number and severity of angina attacks and increases exercise tolerance. The antiarrhythmic effect is due to the suppression of cardiac automatism (including in the pathological focus) and the slowing down of atrioventricular conduction.

After ingestion is rapidly absorbed from the gastrointestinal tract. Eating does not affect absorption, so nebivolol can be taken regardless of meal times. Bioavailability is about 12% in patients with “fast” metabolism (the effect of “initial passage”) and can be almost complete in patients with “slow” metabolism.

In blood plasma, both enantiomers are predominantly bound to albumin.

Nebivolol is metabolized by alicyclic and aromatic hydroxylation and partial N-dealkylation. The resulting hydroxy and amino derivatives are conjugated with glucuronic acid and displayed as
O- and N-glucuronides. The metabolic rate of nebivolol by aromatic hydroxylation is genetically determined by oxidative polymorphism and depends on the CYP2D6 isoenzyme. The metabolic rate does not affect the effectiveness of nebivolol.

Given the differences in metabolic rates, the dose of the drug should always be chosen individually: patients with a “slow” metabolism require a smaller dose.

Nebivolol is marketed under different brands and generic names, and comes in different dosage forms:

Orally, preferably at the same time of the day, regardless of the meal time, without chewing and drinking plenty of liquid.

If necessary, the daily dose of nebivolol can be increased to 10 mg (in one step). The optimal therapeutic effect becomes pronounced after 1-2 weeks of taking the drug, and in some cases - after 4 weeks. Nebivolol can be used in combination therapy with other drugs that reduce blood pressure.

The dose of nebivolol is selected gradually until an individual optimal maintenance dose is reached. It is necessary to begin treatment of chronic heart failure with β-adrenoreceptor blockers in a clinically stable state over the past two weeks.

Treatment begins with a dose of 1.25 mg 1 time per day with a gradual increase (at intervals of at least 2 weeks) to 2.5–5 mg 1 time per day, if necessary up to a maximum dose of 10 mg 1 time per day. The patient must be under the supervision of a physician for 2 hours after taking the first dose of the drug, as well as after each subsequent dose increase. During the selection of the dosing regimen in case of worsening of the course of chronic heart failure or intolerance of the drug, it is recommended to reduce the dose of nebivolol or stop taking it. Reception of nebivolol is not recommended to stop abruptly (if it is not necessary), since this may lead to a temporary exacerbation of the symptoms of heart failure. If it is necessary to stop taking the drug, the cancellation is carried out gradually, halving the dose twice a week.

Patients with a renal failure (KK less than 20 ml / min.)

The initial dose is 2.5 mg / day. If necessary, the daily dose can be increased to 5 mg. In patients with impaired renal function (QC less than 20 ml / min), the dose should be increased with extreme caution.

For patients older than 65 years, the initial dose is 2.5 mg / day. If necessary, the daily dose can be increased to 5 mg. However, taking into account the limited experience of using the drug in elderly patients, it is necessary to be careful and conduct a thorough examination of patients over the age of 65 years. Elderly patients do not need to adjust the dose, so it is necessary to individually select the dose, gradually increasing it to the maximum tolerated dose.

On the part of the immune system: the frequency is unknown - angioedema, hypersensitivity.

On the part of the organ of vision: the frequency is unknown - impaired vision, dry eyes.

On the part of the skin and subcutaneous tissues: often - edema; infrequently - skin eruption of erythematous character, skin itch; very rarely - aggravation of the course of psoriasis; frequency is unknown - alopecia.

On the part of the respiratory system: often - shortness of breath; infrequently - bronchospasm (including in the absence of obstructive pulmonary disease in history).

With simultaneous use of “slow” calcium channels (BMCC) with blockers (verapamil, diltiazem), the negative effect on myocardial contractility and atrioventricular conductivity is enhanced. Intravenous administration of verapamil is not recommended against the background of the use of nebivolol.

With simultaneous use of nebivolol with antihypertensive drugs, nitroglycerin, severe hypotension may develop (special caution is necessary when used simultaneously with prazosin).

With simultaneous use of nebivolol with antihypertensive drugs of central action (clonidine, guanfacine, moxonidine, methyldopa, rilmenidine), heart failure can worsen due to a decrease in sympathetic tone (decrease in heart rate and cardiac output, symptoms of vasodilation). In the case of abrupt cancellation of these drugs, especially before the cancellation of nebivolol, the development of ricochet hypertension (syndrome of "cancellation") is possible.

Concomitant use of nebivolol and BMCA of the dihydropyridine series (amlodipine, felodipine, licidipine, nifedipine, nicardipine, nimodipine, Nitrendipine) may increase the risk of arterial hypotension. An increased risk of further deterioration of the pumping function of the ventricles in patients with heart failure cannot be ruled out.

With simultaneous use with class I antiarrhythmic drugs (quinidine, flekainid, disopyramide, micelitin) and with amiodarone, it is possible to increase the negative inotropic effect and lengthen the time of arousal in the atria.

With simultaneous use with cardiac glycosides, no increase in the effect on the slowing of atrioventricular conductivity was revealed.

The simultaneous use of nebivolol and drugs for general anesthesia can cause the suppression of reflex tachycardia and increase the risk of arterial hypotension.

No clinically significant interaction with non-steroidal anti-inflammatory drugs has been established.

Acetylsalicylic acid as an antiplatelet agent can be used simultaneously with nebivolol.

The simultaneous use of nebivolol with tricyclic antidepressants, barbiturates and phenothiazine derivatives may enhance the antihypertensive effect of nebivolol.

The simultaneous use of nebivolol with insulin and hypoglycemic agents for oral administration may mask some of the symptoms of hypoglycemia (rapid heartbeat, tachycardia).

Simultaneous reception with floktafenin is contraindicated: nebivolol is able to prevent the compensatory reactions of the cardiovascular system associated with arterial hypotension or shock, which can be caused by floctafenin.

At simultaneous use with a sultoprid the increased risk of developing of ventricular arrhythmia like "pirouette" is noted.

When applied simultaneously, sympathomimetic agents suppress the activity of nebivolol.

With simultaneous use of nebivolol with drugs that inhibit serotonin reuptake, or with other biotransforming agents involving the CYP2D6 isoenzyme, plasma concentration of nebivolol increases, nebivolol metabolism slows down, which may lead to the risk of bradycardia.

When used simultaneously with digoxin, nebivolol does not affect the pharmacokinetic parameters of digoxin.

With simultaneous use with cimetidine concentration of nebivolol in the blood plasma increases (data on the effect on the pharmacological effects of the drug are not available).

The simultaneous use of nebivolol and ranitidine does not affect the pharmacological parameters of nebivolol.

With the simultaneous use of nebivolol with nicardipine, the concentration of active substances in the blood plasma increases slightly, but this has no clinical significance.

Simultaneous use of nebivolol and ethanol, furosemide, or hydrochlorothiazide does not affect nebivolol pharmacokinetics.

No clinically significant interaction of nebivolol and warfarin has been established.

Nebivolol can have a harmful effect on the course of pregnancy, on the fetus and the newborn. Reduction of placental perfusion under the action of
β-blockers can cause fetal developmental delay, fetal death, miscarriage, and premature birth. Newborns may experience bradycardia, lower blood pressure, hypoglycemia, and respiratory paralysis. Use during pregnancy is possible only if the expected benefit to the mother outweighs the potential risk to the fetus. Nebivolol should be discontinued 48-72 hours before delivery. In cases where this is not possible, it is necessary to ensure strict monitoring of newborns within 48-72 hours after delivery.

Animal studies have shown that nebivolol is excreted in milk from lactating animals. If necessary, the use of the drug during lactation breastfeeding should be stopped.

Cancellation of β-blockers should be carried out gradually over 10 days (up to 2 weeks in patients with ischemic heart disease).

Control of blood pressure and heart rate at the beginning of the drug should be daily.

In elderly patients, monitoring of renal function is necessary (1 time in 4-5 months). In case of angina, the dose of the drug should provide a heart rate at rest within
55-60 beats / min, with a load - no more than 110 beats / min.

β-blockers can cause bradycardia: the dose should be reduced if the heart rate is less than 50-55 beats / min (see section "Contraindications").

When deciding on the use of the drug Nebivolol in patients with psoriasis, one should carefully relate the perceived benefits of using the drug and the possible risk of exacerbation of the course of psoriasis.

Patients using contact lenses should take into account that, with the use of β-blockers, there may be a decrease in the production of tear fluid.

When performing surgical interventions, the anesthesiologist should be warned that the patient is taking β-blockers.

Nebivolol does not affect plasma glucose concentration in patients with diabetes mellitus. However, caution should be exercised in treating these patients, since Nebivolol may mask certain symptoms of hypoglycemia (for example, tachycardia) caused by the use of hypoglycemic oral and insulin drugs. Control of plasma glucose concentration should be carried out 1 time in 4-5 months. (in diabetic patients).

With hyperfunction of the thyroid gland, β-blockers may mask tachycardia.

β-blockers should be used with caution in patients with chronic obstructive pulmonary disease, as bronchospasm may increase.

β-blockers can increase the sensitivity to allergens and the severity of anaphylactic reactions.

In smokers, the effectiveness of β-adrenergic blockers is lower compared with non-smoking patients.

Impact on ability to drive vehicles and other mechanisms

During the period of treatment, care must be taken when driving and occupying other potentially dangerous activities that require high concentration of attention and speed of psychomotor reactions.

Treatment: gastric lavage, taking activated carbon. In the case of a pronounced decrease in blood pressure, it is necessary to give the patient a horizontal position with raised legs, if necessary, in / in the introduction of fluid and vazopressorov. For bradycardia, 0.5-2 mg of atropine should be administered intravenously. In the absence of a positive effect, a transvenous or intracardiac pacemaker can be delivered. In case of atrioventricular blockade (II-III stages), it is recommended intravenous injection of β-adrenomimetics, if they are ineffective, consideration should be given to setting up an artificial pacemaker. In heart failure, treatment begins with the introduction of cardiac glycosides and diuretics, in the absence of an effect, the administration of dopamine, dobutamine or vasodilators is advisable. When bronchospasm is used in / in β2-adrenomimetics. In ventricular premature beats, lidocaine may be prescribed (class IA antiarrhythmic drugs are not used). When convulsions is recommended in / in the introduction of diazepam. When hypoglycemia is shown in / in the introduction of dextrose (glucose).

Studies and clinical trials of Nebivolol (Click to expand) 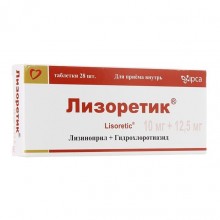 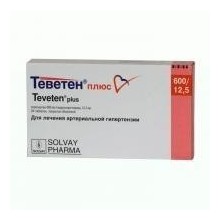 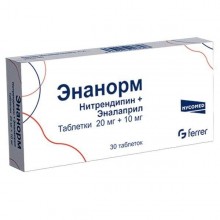 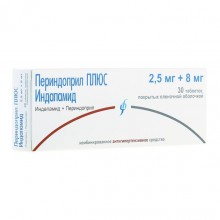 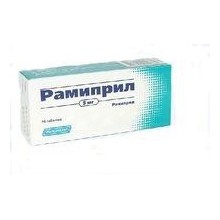