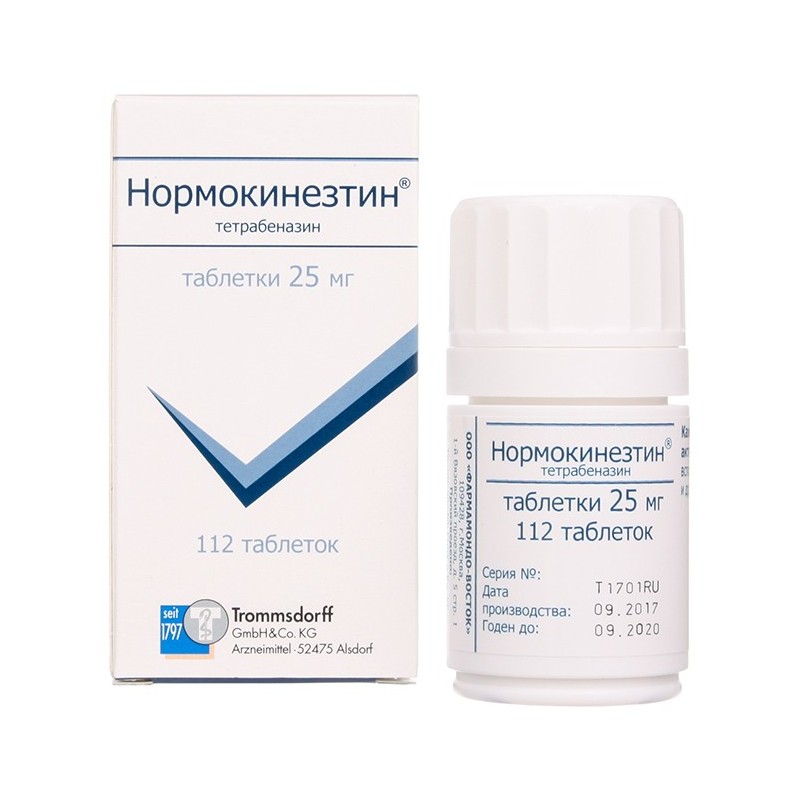 A synthetic derivative of benzoquinolysine, has a specific effect on the central nervous system, similar to reserpine, but unlike the latter, tetrabenazine has a slight peripheral activity and a shorter duration of action. Tetrabenazine interferes with the metabolism of biogenic amines such as serotonin and norepinephrine in the brain.
Inhibits the reuptake of monoamines in the nerve endings of the presynaptic neurons of the central nervous system, which leads to a decrease in the amount of monoamines, incl. dopamine in the brain.
Dopamine depletion leads to hypokinesia, which helps reduce the severity of chorea. In synaptic nerve endings, tetrabenazine inhibits monoamine reuptake through reversible and short-term binding of the vesicular monoamine transporter (VMAT). VMAT 2 transports monoamines to peripheral and central neurons, while VMAT 1 regulates transport in peripheral chromaffin tissues. Tetrabenazine has a higher affinity for VMAT 2 than for VMAT 1, so the drug has a short-term insignificant peripheral effect.

Used internally. Treatment should be carried out under the supervision of a physician experienced in the treatment of hyperkinetic disorders. The recommended starting dose for Huntington's chorea for adults is 12.5 mg 1 to 3 times a day. Further, the dose can be increased once every 3-4 days by 12.5 mg until the optimal therapeutic effect is achieved or until side effects appear (sedation, parkinsonism, depression).
The maximum dose is 200 mg / day.
In the absence of a therapeutic effect when taking tetrabenazine at the maximum daily dose for 7 days, it is unlikely that an increase in the dose or an extension of the treatment period will have the desired effect.
In elderly patients, tetrabenazine is recommended for use in a standard dose. It is possible to limit the dose taken by the appearance of symptoms of parkinsonism.
Patients with mild to moderate hepatic impairment are advised to take 1/2 the initial dose with gradual slow titration to the optimal therapeutic dose. The effect of the drug in patients with severe liver dysfunction has not been studied, therefore, in such cases, it is recommended to use the drug with caution.
Studies in patients with impaired renal function have not been conducted. Treatment of this category of patients should be carried out with caution.

Tetrabenazine should not be used concomitantly with reserpine, because it can block the action of reserpine. Tetrabenazine should not be used concomitantly with MAO inhibitors.
Levodopa should be used with caution when treating with tetrabenazine, since tetrabenazine suppresses the effect of levodopa and thereby weakens its effectiveness.
Concomitant use with tricyclic antidepressants, alcohol, opioids, beta-blockers, antihypertensive drugs, hypnotics and neuroleptics is not recommended.
A targeted study of the interaction of tetrabenazine in vivo has not been carried out, therefore the enzymes involved in its metabolism are partially unknown. In vitro studies have shown that tetrabenazine can be an inhibitor of the CYP2D6 isoenzyme and, as a result, cause an increase in plasma concentrations of drugs metabolized with the participation of the CYP2D6 isoenzyme.
Inhibitors of the CYP2D6 isoenzyme (for example, fluoxetine, paroxetine, terbinafine, moclobemide and quinidine) can lead to an increase in the plasma concentration of the active metabolite of dihydrotetrabenazine, therefore, when taken together, they should be used with caution. In this case, it may be necessary to reduce the dose of tetrabenazine.
Tetrabenazine should be used with caution with drugs that increase the QTc interval, especially antipsychotics (eg chlorpromazine, thioridazine), antibiotics (eg gatifloxacin, moxifloxacin), and class IA and III antiarrhythmics (eg quinidine, procainamide, procainamide sotalol).

You should not take tetrabenazine in patients with rare hereditary diseases - galactose intolerance, lactase deficiency or glucose-galactose malabsorption.
Dose-dependent adverse reactions such as sedation, depression, and hypokinetic / rigid syndrome (parkinsonism) are possible. In this case, you should reduce the dose or stop the tetrabenazine treatment.
MAO inhibitors are contraindicated and should be discontinued 14 days before starting tetrabepazine treatment. Tetrabenazine should be used with caution in patients with impaired liver function.
NNS is a rare complication of therapy and most often occurs at the beginning of treatment, in response to changes in dose or after prolonged treatment, as well as after abrupt withdrawal of tetrabenazine. The main symptoms of this disease are mental changes, rigidity, hyperthermia, autonomic disorders (sweating and fluctuations in blood pressure) and an increased level of CPK. If you suspect the presence of NMS, you should immediately stop using tetrabenazine and prescribe appropriate treatment. Tetrabenazine causes a slight increase (up to 8 msec) in the QT interval.
Tetrabenazine should be used with caution in combination with other drugs that prolong the QTc interval in patients with congenital long QT interval syndrome and in patients with a history of cardiac arrhythmias.


Clinical studies of the efficacy and safety of the drug in children have not been carried out. Tetrabenazine is not recommended for children.
Influence on the ability to drive vehicles and work with mechanisms
Tetrabenazine can cause drowsiness and, therefore, can interfere with tasks requiring increased attention to varying degrees, depending on dose and individual tolerance.

Studies and clinical trials of Tetrabenazine (Click to expand)