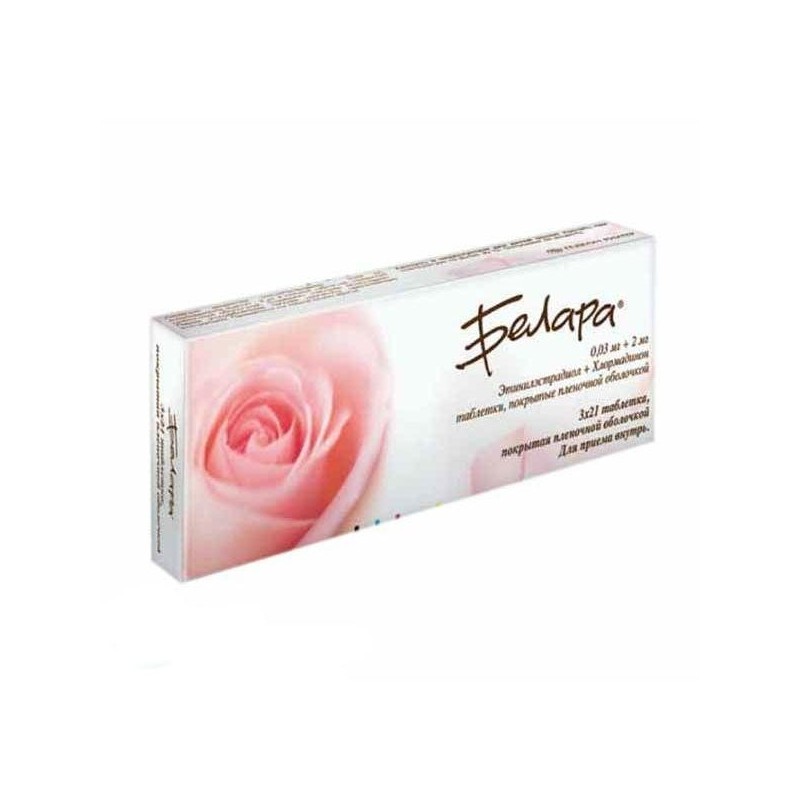 Pharmacodynamics:
Prolonged (over 21 days) use of the BELARA drug leads to a decrease in the secretion of follicle-stimulating hormone and luteinizing hormone, and, consequently, suppression of ovulation, endometrial proliferation and its secretory transformation. At the same time, the mucus properties of the cervical canal change, which is accompanied by difficulty in passing sperm through the cervical canal and a violation of their mobility.

Chlormadinone acetate, a progestogen that is part of BELARA, has antiandrogenic properties. Its action is based on the ability to replace androgens at specific receptors, eliminating and weakening the effect of endogenous and exogenous androgens. To completely suppress ovulation, 1.7 mg of chlormadinone acetate is required daily. The required dose per cycle is 25 mg.
The other active component of BELARA, ethinyl estradiol, inhibits the secretion of skin sweat glands. It also significantly increases the production of globulin that binds sex hormones, thereby reducing the amount of free testosterone in the blood plasma. Interacts with specialized estrogen receptors in target organs (in the fallopian tubes, cervix, vagina, external genital organs, excretory ducts of the mammary glands), causes proliferation of the endometrium.
In addition to a reliable contraceptive effect, the positive effect of the BELARA drug is manifested in the normalization of the menstrual cycle, reduction in the manifestation of premenstrual syndrome, the incidence of iron deficiency anemia, dysmenorrhea, functional ovarian cysts, ectopic pregnancy, endometrial and ovarian malignancies, some benign diseases of the mammary glands and inflammatory diseases pelvic organs.

Belara® is marketed under different brands and generic names, and comes in different dosage forms:

Combined oral contraception (CPC) is contraindicated in the cases listed below. Reception of Belara should be immediately discontinued if at least one of the following symptoms appears:

Pregnancy: use of the drug Belara during pregnancy is contraindicated. Before you start using the drug Belar, it is necessary to exclude the presence of pregnancy. When pregnancy occurs while taking Belara, the drug should be stopped immediately. The data available to date do not contain information on the development of teratogenic or embryotoxic effects in women who accidentally took during pregnancy drugs containing estrogen and progesterone in the same combination as in the Belar preparation.

Lactation period: It is not recommended to use Belara during breastfeeding, because the drug reduces the amount of milk produced and changes its composition. Small amounts of hormones that are part of the contraceptive and / or their metabolites are excreted in breast milk and can affect the fed baby.

Smoking increases the risk of severe cardiovascular side effects of PDA, the risk increases with age and depending on the number of cigarettes smoked and more pronounced in women over the age of 35, smoking women over the age of 35 should use other methods of contraception.
With the use of PDA increases the risk of serious diseases: myocardial infarction, thrombosis / thromboembolism, stroke and liver tumors.
Other risk factors such as hypertension, hyperlipidemia, obesity and diabetes mellitus clearly increase the risk of morbidity and mortality.
If one of the above listed diseases / risk factors is present, it is necessary to weigh the possible benefits of taking Belar.® against risks, and this should be discussed with a woman before taking her medication. If these diseases or risk factors begin to manifest or progress while taking the drug, you should consult a doctor.
The doctor must decide whether to stop taking this drug.
Thromboembolism and other vascular diseases
It is noted that there is a relationship between taking CPC and an increased risk of diseases caused by venous or arterial thromboembolism, for example, myocardial infarction, brain stroke, deep vein thrombosis or pulmonary embolism. These complications are rare.
Admission of PDA leads to an increased risk of venous thromboembolism (VTE). The risk of VTE is greatest during the first year of administration. The degree of this risk is less than during pregnancy, when the incidence of VTE is 60 cases per 100,000 pregnancies. VTE is fatal in 1–2% of cases. There is no data on the assessment of the development of risk of VTE when taking Belara® in comparison with other PDAs.
The risk of developing venous thromboembolic complications when taking CPC increases:

Women taking PDA should be informed that when symptoms appear that resemble thrombosis symptoms, they should contact their doctor. Belara® should be canceled if you suspect or confirm the diagnosis of thrombosis.
Increasing or increasing the severity of migraine attacks while taking CPC (which may be a precursor to the development or a symptom of cerebrovascular disease) may be the reason for their cancellation.

Tumors
It is noted that the use of PDA is: a risk factor for developing cervical cancer in women infected with the human papillomavirus (HPV). However, the question of the degree of influence on the results of this observation of other related factors (for example, the number of sexual partners or the use of mechanical contraceptives) remains controversial (see also "Medical examination").
There is evidence that the relative risk (RR = 1.24) of breast cancer in women who take PDA is slightly higher. Within 10 years after the discontinuation of PDA, the risk level gradually decreases and returns to the age level. Since breast cancer is rarely seen in women under the age of 40, the difference between the risk of breast cancer in currently receiving and newly treated CCP women and the overall risk of developing the disease is small.

There are reports of the development in rare cases of benign, even more rare cases of malignant liver tumors during the intake of PDA. In some cases, these tumors are the causes of life-threatening intraperitoneal bleeding. In the case of severe abdominal pain that does not go away on its own, hepatomegaly or signs of intra-abdominal bleeding, it is necessary to take into account the possibility of a liver tumor, and to cancel Belar®.

Other diseases
Many women taking oral contraceptives have a slight increase in blood pressure; however, a clinically significant increase is rare. The relationship between the appointment of oral contraceptives and the clinical manifestation of hypertension has not yet been confirmed. If while taking Belara® a clinically significant increase in blood pressure appears, the drug should be discontinued and hypertension should be treated. As soon as blood pressure indicators return to normal on the background of antihypertensive therapy, taking Belara® can continue.
In women, with a herpes pregnancy in history, while taking a PDA, there may be a relapse of the disease. In women with a history of hypertriglyceridemia or those with a family history, the risk of pancreatitis increases while taking CPC. Acute or chronic abnormal liver function may require the abolition of the PDA to normalize the indicators of liver function. Relapse of cholestatic jaundice, which first appeared during pregnancy, or the previous administration of sex hormones, requires the abolition of the CCP.

KPC may have effects on peripheral insulin resistance or glucose tolerance.
Therefore, patients with diabetes while taking oral contraceptives should be under constant surveillance.
In rare cases, chloasma may develop, especially in women who have had a chloasma during pregnancy. Women at risk of developing chloasma should avoid exposure to the sun and ultraviolet radiation while taking oral contraceptives.
Patients with rare congenital abnormalities - galactose intolerance, Lappa-deficient lactase, or glucose-galactose malabsorption syndrome - should not take this medication.

Medical examination
Before prescribing oral contraceptives, it is necessary to collect complete data on the health of the woman and her relatives in order to identify contraindications (see section “Contraindications”) and risk factors (see section “With caution”). A woman must undergo a medical examination.
Medical examination should be conducted annually while taking Belara®. Regular medical examinations are also necessary due to the fact that diseases that are contraindications (for example, transient ischemic attacks) or risk factors (for example, venous or arterial thrombosis in relatives) may occur for the first time while taking oral contraceptives. Medical examination should include measuring blood pressure, examining the mammary glands, abdomen, internal and external genital organs, taking a smear from the cervix, and carrying out appropriate laboratory tests.
A woman should be warned that the appointment of oral contraceptives, including the drug Belara®, does not protect it from infection with HIV infection (AIDS) or other sexually transmitted diseases.

Lack of effectiveness
Skip taking pills (see section "Dosage and administration", "Missing the drug"), nausea or symptoms of indigestion, including diarrhea, long-term simultaneous use of certain drugs (see the section “Use in case of diarrhea, vomiting”, “Interaction with other drugs”) or, in very rare cases, metabolic disorders may reduce the effectiveness of contraception.

Effect on the menstrual cycle
Bleeding or bleeding "breakthrough" (intermenstrual)
All oral contraceptives can cause irregular vaginal bleeding (bleeding / bleeding "breakthrough"), especially during the first few cycles while taking the drug. Therefore, a medical examination for irregular cycles should be carried out only after a period of adaptation, which usually lasts for 3 cycles. If while taking Belara® the appearance of extraordinary bleeding continues or appeared for the first time in a woman with a regular cycle, it is necessary to conduct an examination to exclude pregnancy or organic pathology; After exclusion of pregnancy and organic pathology, taking Belara® You can continue or go to the reception of another drug.
Bleeding between cycles can be a sign of insufficient contraceptive effectiveness.

Laboratory values
Changes in some laboratory parameters, including the functional activity of the liver, adrenal glands and the thyroid gland, the level of plasma bound proteins (for example, SHBG (SHBG), lipoproteins), carbohydrate metabolism, coagulation, and fibrinolysis may occur while taking KPC.
The nature and extent of changes is partly determined by the nature and dose of the hormones taken.

INFLUENCE ON THE ABILITY TO MANAGE THE VEHICLE OR WORK ON EXACT INSTRUMENTS
Does not affect.

With an overdose of the drug is not observed any serious toxic reactions. If you accidentally take a large number of pills may develop nausea, vomiting, bleeding / bleeding from the vagina.
There is no specific antidote. Symptomatic treatment. In rare cases, it is necessary to monitor indicators of water and electrolyte metabolism and liver function.

Studies and clinical trials of Belara (Click to expand) 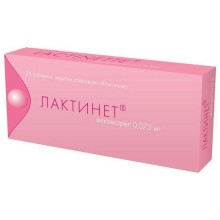 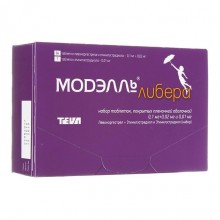 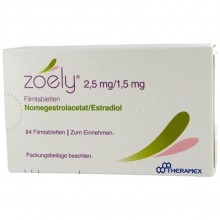 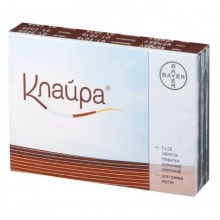