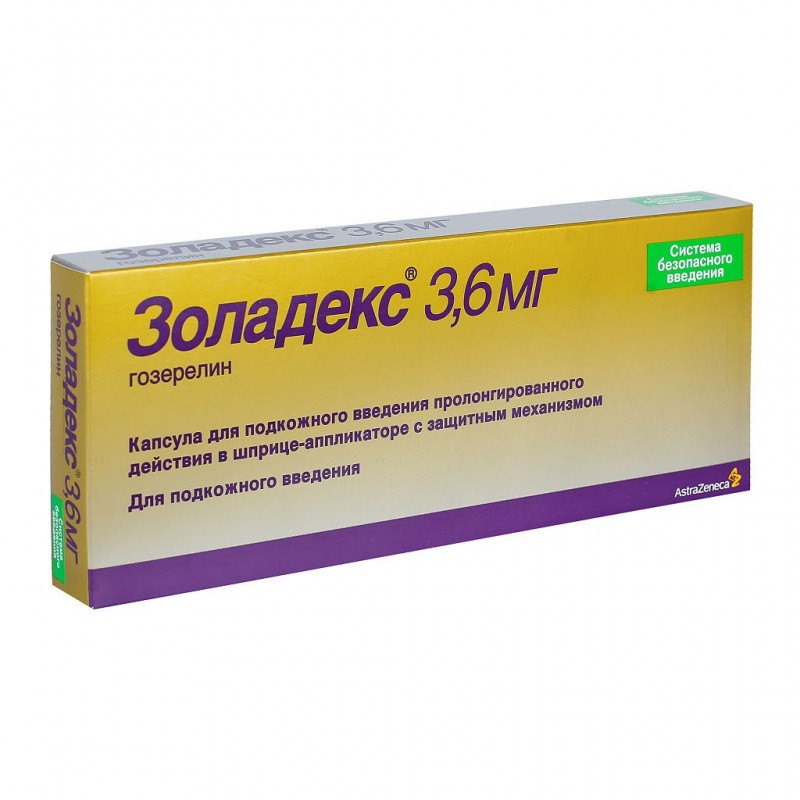 Zoladex is an antitumor, an analogue of gonadotropin-releasing hormone.

Synthetic analogue of natural GnRH. With the constant use of the drug Zoladex®inhibits the secretion of pituitary LH, which leads to a decrease in the concentration of testosterone in the blood serum of men and the concentration of estradiol in the blood serum of women. This effect is reversible after discontinuation of therapy. At the initial stage of the drug Zoladex®, like other GnRH agonists, can cause a temporary increase in serum testosterone concentrations in men and serum estradiol concentrations in women. In the early stages of therapy with Zoladex® some women may experience vaginal bleeding of varying duration and intensity.

In men, by about the 21st day after the introduction of the first capsule, the concentration of testosterone decreases to the castration levels and continues to be reduced with constant treatment every 3 months in the case of Zoladex® 10.8 mg. Such a decrease in the concentration of testosterone with the use of the drug Zoladex® 10.8 mg in most patients leads to regression of the prostate gland tumor and to symptomatic improvement.

After the introduction of the drug Zoladex® 10.8 mg serum estradiol concentration in women decreases within 4 weeks after the administration of the first capsule and remains reduced to a level comparable to that observed in women in menopause. With the initial use of other analogues of GnRH and the transition to the drug Zoladex® 10.8 mg estradiol suppression is maintained. Suppression of estradiol leads to a therapeutic effect in endometriosis and uterine fibromas.

While taking GnRH agonists in women, menopause may occur. Rarely, some women do not recover menstruation after the end of therapy.

The introduction of the capsule every 12 weeks ensures the maintenance of effective concentrations. Cumulation in tissues does not occur. Drug Zoladex® binds poorly to protein T1/2its serum is 2–4 hours in patients with normal renal function. T1/2 increases in patients with impaired renal function. With the introduction of the drug Zoladex® 10.8 mg every 12 weeks this change will not have significant effects, therefore, changing the dose for these patients is not required. In patients with hepatic insufficiency, no significant changes in pharmacokinetics are observed.

Zoladex Depot 3.6 mg is injected subcutaneously into the anterior abdominal wall every 28 days.

With malignant neoplasms the drug is prescribed for a long time.
To thin the endometrium 2 depot Zoladeksa 3.6 mg administered at intervals of 4 weeks, while the operation is recommended for the first two weeks after the introduction of the second depot capsule.

For benign gynecological tumors the drug is prescribed for no more than 6 months, since at the moment there are no clinical data on longer courses of therapy. Repeat courses should not be prescribed due to the danger of a decrease in bone mineral density.

In vitro fertilization desensitization of the pituitary gland is determined by the concentration of estradiol in the serum. As a rule, the required level of estradiol, which corresponds to that in the early follicular phase of the cycle (approximately 150 pmol / l), is reached between 7 and 21 days. When desensitization of the pituitary gland begins, stimulation of superovulation (controlled stimulation of the ovaries) with gonadotropin begins. The induced desensitization of the pituitary when using Zoladex may be more persistent, which may lead to an increased need for gonadotropin. At the appropriate stage of follicular development, the introduction of gonadotropin is stopped and then human chorionic gonadotropin is administered to induce ovulation. Monitoring of the treatment, the procedure of oocyte extraction and fertilization is carried out in accordance with the established practice of this medical institution.

On the part of the immune system: infrequently - hypersensitivity reactions; rarely - anaphylactic reactions.

On the part of the endocrine system: very rarely - hemorrhage in the pituitary gland.

From the nervous system and mental sphere: very often - a decrease in libido associated with the pharmacological action of the drug and in rare cases, leading to its cancellation; often - decrease in mood, depression (in women), paresthesia, compression of the spinal cord (in men), headache (in women); very rarely - psychotic disorder.

From the CCC: very often - tides associated with the pharmacological action of the drug and in rare cases led to its cancellation; often - myocardial infarction (in men); heart failure (in men), the risk of which increases with the simultaneous prescription of anti-androgenic drugs. Changes in blood pressure, manifested as hypotension or hypertension. These changes are usually transient and resolved either during the treatment with Zoladex.®, or after its termination. In rare cases, these changes required medical intervention, including the abolition of the drug Zoladex®.

From the skin and subcutaneous tissue: very often - excessive sweating associated with the pharmacological action of the drug and in rare cases led to its cancellation; often - alopecia (in women), as a rule, slightly pronounced, incl. in young patients with benign neoplasms; rash, mostly slightly pronounced, which was often resolved during the continuation of therapy; of unspecified frequency - alopecia (in men), which manifested itself as hair loss throughout the body due to a decrease in the level of androgens.

From the musculoskeletal system: often - arthralgia (in women), bone pain (in men).At the beginning of treatment, prostate cancer patients can often experience a temporary increase in bone pain, which is treated symptomatically; infrequently - arthralgia (in men).

Carefully: males who are at particular risk of obstruction of the ureters or compression of the spinal cord.

The drug is contraindicated for use during pregnancy and lactation.
Zoladex should not be prescribed during pregnancy, since theoretically there is a risk of abortion or fetal abnormalities when using LHRH agonists.
In women of childbearing age, possible pregnancies should be excluded prior to treatment with zoladex.
During therapy, non-hormonal methods of contraception should be used until menstruation resumes.

Zoladex should be administered with caution to male patients who are known to be at risk of ureteral obstruction or compression of the spinal cord. In this category of patients should be systematically monitored during the first month of therapy. In the event of symptoms of compression of the spinal cord or renal failure caused by ureteral obstruction, the standard treatment for these complications should be prescribed.
During treatment and prior to the restoration of menstruation, non-hormonal methods of contraception should be used.
The use of the drug in men and women can cause bone demineralization. Currently available data indicate an average decrease of 4.6% in bone mineral density of the vertebrae during a 6-month course of treatment. Bone density is gradually restored after cessation of treatment, remaining below the initial level by an average of 2.6% (there is no separate information about this when using Zoladex containing 10.8 mg of goserelin). It was shown that in patients receiving Zoladex for endometriosis, additional hormone replacement therapy (daily estrogen and progestogen preparations) reduced the loss of bone mineral density and the severity of vasomotor symptoms. Currently, there is no experience with the use of hormone replacement therapy in the treatment with Zoladex containing 10.8 mg of goserelin.
Zoladex should be used with caution in women with impaired bone metabolism.
Currently, there are no clinical data on the safety and efficacy of Zoladex treatment of benign gynecological diseases for periods of time longer than 6 months.
The resumption of menstruation after the end of treatment with Zoladex may be delayed. In some women, in rare cases, during treatment with Zoladex (as with the treatment of other LHRH analogues), menopause may occur, i.e. after discontinuation of therapy, menstruation may not occur.
Zoladex can also cause an increase in the resistance of the cervix, and in this connection - difficulties in dilating the cervix.
When in vitro fertilization, Zoladex should be used only under the supervision of a specialist with experience in this field.
When using Zoladex in combination with gonadotropin, as in the case of using this combination with other LHRH analogues, cases of ovarian hyperstimulation syndrome were reported, therefore, during the stimulation of superovulation, careful monitoring is necessary to identify patients with the risk of ovarian hyperstimulation syndrome. If necessary, the introduction of human chorionic gonadotropin should be discontinued.
It is recommended to use Zoladex with caution during in vitro fertilization in patients with polycystic ovary syndrome, since possible stimulation of a large number of follicles.

Data regarding overdose in humans is not available.

Studies and clinical trials of Goserelin (Click to expand) 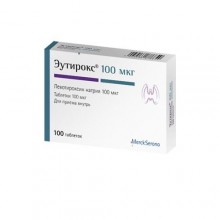 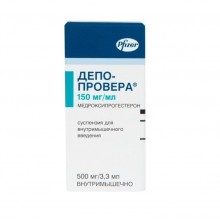 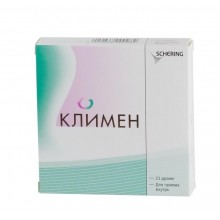 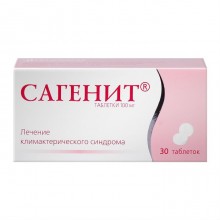 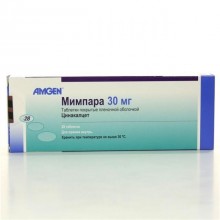 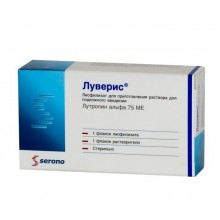 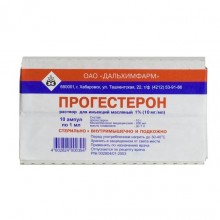