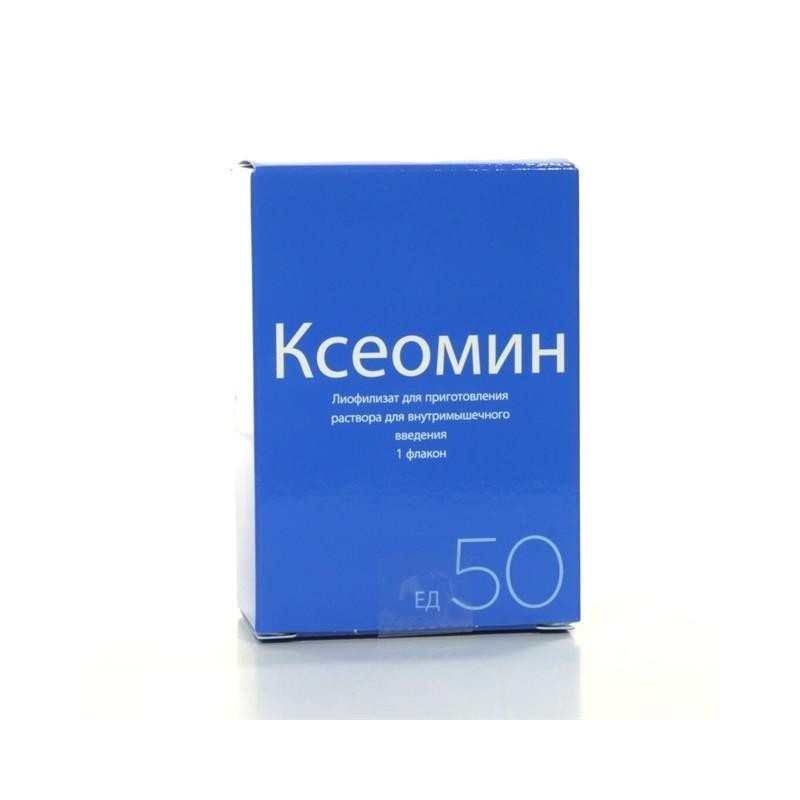 Xeomin acts selectively on peripheral cholinergic nerve endings, inhibiting the release of acetylcholine. The introduction into the cholinergic nerve endings occurs in three stages: the binding of the molecule to the external components of the membrane, the internalization of the toxin by endocytosis and the translocation of the endopeptidase domain of the toxin from the endosome to the cytosol. In the cytosol, the endopeptidase domain of the toxin molecule selectively cleaves SNAP-25, an important protein component of the mechanism controlling the membrane movement of the exo-vesicles, thus stopping the release of acetylcholine. The end effect is relaxation of the injected muscle.
The action of the drug begins within four to seven days after the injection. The effect of each procedure usually lasts three to four months, although it can last much longer or less.

IM The drug can be administered only by physicians with special training, as well as experience in handling botulinum toxin and electromyography equipment. The doctor sets the dosage and number of injection sites in the muscle for each patient individually.

Blepharospasm: after dissolving, Xeomin is injected with a sterile needle 27–30 G.

If vision is impaired due to spasms in the forehead, the lateral areas of the eye's circular muscles and the upper part of the face, additional injections can be made in these areas. The action of the drug begins, on average, within 4 days after the injection. The effect of each procedure lasts, as a rule, 3-4 months, although it can last much longer or less.

If the effect of the initial dose was insufficient (duration

Spastic torticollis: in the treatment of spastic torticollis, the dosage should be selected for each patient individually, depending on the position of the neck and head, localization of pain, muscle volume (hypertrophy, atrophy), patient's body weight and response to therapeutic procedures. In the practice of treatment, the maximum dose of the drug in the course of a single procedure usually should not exceed 200 U, but dosage of up to 300 U is possible. In the same place should not be administered a dose of the drug in excess of 50 U.

Spastic torticollis therapy includes injections into the sternocleidomastoid muscle, into the muscle that raises the scapula; in the scalene muscles, in the belt muscle and / or in the trapezius muscle.

Injections should not be given to both sternocleidomastoid muscles, since this increases the risk of adverse effects of the drug (in particular dysphagia), which occur with bilateral injections of the drug into this muscle, or at doses exceeding 100 U.

With spastic cramps, electromyography may be necessary to determine the muscles involved. Conducting injections in several places allows the drug to evenly cover areas of muscles susceptible to dystonia (especially when injected into large muscles). The optimal number of injection sites depends on the size of the muscle. The action of the drug begins, on average, within 7 days after the injection. The effect of each procedure lasts about 3-4 months, but it can last much longer or less. The interval between procedures should be at least 10 weeks.

In addition, when using a similar drug containing botulinum toxin type A and used in clinical trials along with Xeomin, the following side effects were noted. They are possible with the use of the drug Xeomin.

In the treatment of spastic torticollis

Infrequently - inflammation or pressure at the injection site, headache, asthenia, increased sweating, tremor, hoarseness, colitis, vomiting, diarrhea, dry mouth, bone pain, myalgia, skin rashes, itching, peeling of the skin, eye pain . In addition, when using a similar drug containing botulinum toxin type A and used in clinical trials along with Xeomin, the following side effects were noted. They are possible with the use of the drug Xeomin.

Dysphagia can be expressed from very weak to strong, with the possibility of aspiration; in rare cases, medical care is required. Dysphagia can persist for 2–3 weeks from the moment of injection, however, a case of three-month dysphagia was recorded.

Dysphagia is a dose-dependent complication: according to clinical studies, dysphagia is rare, if the total dose of the drug does not exceed 200 U in a single procedure.

The information below is based on data on the effects of other complex preparations containing botulinum toxin type A.

Information about severe adverse effects that may be associated with damage to the cardiovascular system - such as arrhythmia and myocardial infarction, including fatal - extremely insignificant. Whether these lethal outcomes were caused by injections of botulinum toxin type A, or concomitant cardiovascular diseases, has not been precisely established. One case of anaphylactic shock after administration of a complex preparation containing botulinum toxin type A has been reported.

Such side effects as exudative polyformal erythema, urticaria, psoriasis-like rashes, itching and allergic reactions are noted, however, their dependence on the action of the complex preparation containing botulinum toxin type A has not been confirmed.

The drug is contraindicated for people with allergies to the components of the drug, in case of disorders of neuromuscular transmission (gravis lesion, Lambert-Eaton syndrome, with caution prescribed in amyotrophic lateral sclerosis, in neurological diseases as a result of degeneration of motor neurons and other diseases with neuromuscular transmission disorders) . The drug is not administered at elevated temperatures and acute infectious or non-infectious diseases.
The drug is contraindicated in pregnancy and lactation.
The drug is not administered to children and adolescents under 18 years of age.

Peripheral muscle relaxants should be used with caution while carrying out antibiotic therapy with aminoglycosides or spectinomycin (possibly enhanced action Xeomin). The effect of the drug can be reduced by the action of 4-aminoquinoline derivatives.

High doses of Xeomin can lead to the development of pronounced muscle paralysis in places remote from the injection sites (in particular: general weakness, ptosis, diplopia, difficulty speaking and swallowing, as well as paralysis of the respiratory muscles, leading to the development of aspiration pneumonia).
In case of overdose, hospitalization with general supportive measures is necessary. In case of paralysis of the respiratory muscles, intubation and artificial ventilation of the lungs are necessary up to the normalization of the condition.

Studies and clinical trials of Xeomin (Click to expand)